Texas has three executions scheduled for September, two which are back-to-back. Despite increasing scrutiny and lower levels of support than decades past, the killing machine is resistant to slowing down. Help us show Greg Abbott that we are done with state-sponsored murders!

*Edit* Ruben Gutierrez has received a temporary stay from a federal judge, which appears it will not be lifted.

Gutierrez’s lawyers, who very recently took his case, have asked for a stay in order to properly prepare a clemency petition and to investigate issues around DNA testing in the case. Read more here.

On Troy’s case: There is no physical evidence linking Troy to the crime. A co-defendant confessed 5 times before she changed her story! The confession is public knowledge. There is no witness to the crime except the person who was also convicted! There is strong reason to believe Troy is innocent of this murder!

Guilty or not, we can express opposition to executions for countless reasons! Let the Board of Pardons and Paroles and Gov. Abbott know why you don’t support executions.

The Board of Pardons and Parole can recommend a stay of execution and a commutation(lessening) of the sentence. This happened recently with Thomas Whitaker. Contact the Board Members by email at:

–Emails should begin with “Dear Board Members”

–State first that you are a resident of xx place (and maybe your relation to the case, religious affiliation, or occupation) and that you “oppose the execution” and are asking for the board members to “Recommend a stay of execution to Governor Abbott” and/or a “commutation of the sentence to Life Without Parole or Life in Prison” or in cases of innocence or glaring legal issues “A stay of execution until the courts have time to consider the issues with this case so that we can ensure that this inmate can have a fair trial (or sentencing hearing)” or something to that effect.

–Secondly, state any issues with the case including: problems with unconsidered evidence, problems with lying witnesses, problems with racism or disabilities, problems with unfair sentencing, or issues such as victim’s family members oppose the execution, and any evidence that the person has shown positive change, and acknowledge the suffering of the inmate’s family and their possibility to provide something positive to their family or others.

–restate your request and acknowledge your above arguments against the execution

— thank them for their time and attention to the matter and sign with name and any contact information you feel comfortable putting there.

Urge Governor Abbott to stay the execution and consider a commutation at:

Make sure to “@” the governor and to use hashtags for the topic of the post. Stick to the main clemency argument, and use the full name of the person you are supporting. Example:

@govabbott Ruben Gutierrez deserves adequate legal defense & DNA testing to prove his innocence. We can’t tolerate anything less when lives are at stake. Grant him a stay of execution! #stopexecutions #saveruben #deathpenalty

*include a picture or text meme when possible 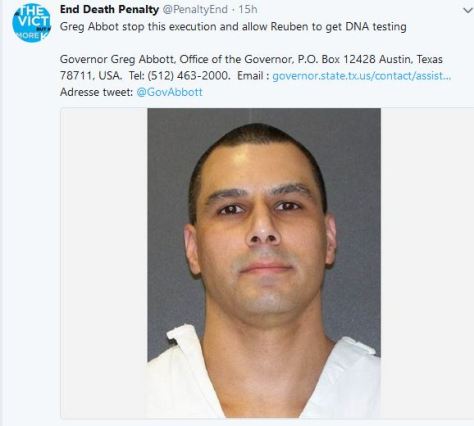 2 thoughts on “Need for clemency campaigns for three upcoming executions:”

We are Texans working together to end all state-sponsored killing, support prisoners’ rights and resistance, re-imagine justice, and demand an end to prison and detention as we know them!

Moving towards the end of Prisons, Jails, and Executions

Shining Light Into the Darkest Corners of the U.S Punishment System

Working together to end all state-sponsored killing, support prisoners' rights & resistance, re-imagining justice, & demanding an end to prison and detention as we know them!

A prisoner-centered blog on life, healing, and justice, with voices from behind and beyond the barbed wire